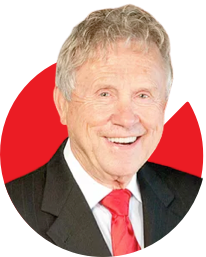 Ken Kern founded Kenneth C. Kern & Associates in 1968 and went on to become a pioneer in Houston’s human resources industry. The firm began as a sole proprietorship and grew into a staff of highly trained and experienced recruiting professionals.

Ken made a lifetime commitment to the executive search industry. He is highly respected for not only his success but also his philosophy of creating long-term relationships. His genuine interest in his clients and their resulting success is evidenced by his enduring client relationships, many of which span more than 40 years.

A graduate of Milby High School in Houston’s East End, Ken received BBA and MBA degrees from the University of Houston and served as a captain in the U.S. Army. Ken is a devoted “Coogs” football fan, having followed the team since 1956. Ken has held numerous leadership positions at his church, including elder, deacon, and youth volunteer, and has participated in local outreaches and mission trips. He has also served on the boards of several professional and charitable organizations. Ken is now retired and spends his days enjoying his family time hunting, fishing, and spending time at the 2K Ranch in East Texas.

Let’s talk about what we can do together.